I’ve always liked to think about my mom outside her role of “mom” – she’s a fascinating person. She was only 25 when she had me but she lived a very full life before I ever came along. ⁠ 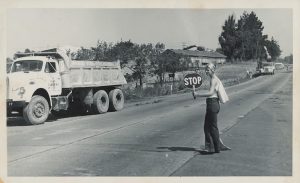 ⁠
Laurie and her sister, Marilyn (my auntie/also like a mom) were some of the first women in the laborer’s union in Sonoma County, flagging traffic on road crews. You can probably imagine the situations they shouldered while working a construction crew in the early 70’s… the days not so long after the Equal Pay Act was signed into law and the fight for the ERA was reaching a fever pitch (still waiting on that one aren’t we!). From the stories she has told me, those days were super tough and also really exhilarating. It sounds like one of those periods of time in a person’s life that continue to shape how they walk through the world. ⁠
⁠
For some reason I’ve always thought about how that experience might have influenced her approach to raising kids – the way she was super fierce in her protection of and love for us. The way she always kept pieces of herself alive that weren’t directly related to her kids – dance, creativity, charity support for women-run businesses in Africa and local breast cancer survivors, throwing giant toga parties and yearly trips with girlfriends. The way she managed to teach her daughters and her son about feminism, drive, softness and strength, our own capabilities and the way we choose to use them in the world. She’s just super fucking cool and I wanted to write about her in the most celebratory of ways!⁠
⁠
Happy mother’s day, mama! I love you to the moon and back! 📸 by Matt Southard